DAY 31. This Sunday Solar went to Rainbow Meadow Farm in Rochester, WA for his first cross-country schooling session. We soared over brightly decorated show jumps and natural cross-country obstacles including ditches, logs, and banks (see video later in post). It was a fun way to celebrate one month together!

First, Solar has more natural jump style than I could have hoped for, especially considering he’s an ex-racehorse who’s not confirmed in how to use his body effectively with a rider. I love that Solar is tidy in front–his knees are even and his shoulders are up over almost every fence. I didn’t teach him that, it’s just his natural form. I know the Prodigious Fund pegged me as a dressage rider, which is true in part, but my passion is riding fast and jumping (preferably bareback, on a beach, with friends). It’s super to work with a horse whose strengths match my interests.

I’m confident in my assessment of Solar at this point in training as an excellent lower level jump prospect (eventing, jumpers, hunters, whatever). By “lower level” I actually mean the levels that most non-professionals compete at: 3’6″ or lower.

Could Solar jump higher? Most likely, especially with gradual, correct training that builds his strength and balance (I’ll be sure too to free jump him later this summer to see what kind of scope he can produce). But Solar lacks the mental drive that is needed in an upper level event horse or jumper, who must go out and attack the course in a forward rhythm with plenty of scope. Just because a horse can do something physically, does not mean that that is what they are best suited for. For example, my 14 hand Haflinger can jump 4’6″, but there is no way that I would expect him to do that in competition–it would be too much of a stretch on his natural abilities. You have to work your horse within their physical and mental abilities so they can excel and shine. Solar’s personality and jump style tell me that he would be extremely capable at the lower levels, even under the guidance of a young or amateur rider. Once he knows his job, if you keep him in his comfort zone he will be reliable, fun to ride, and happy. And because of that, he will win!

Also, Solar is a flat mover right now. That basically means that he lacks engagement and suspension (these are skills he can develop with proper training). He is very tidy with his front legs (awesome!), but is disinclined to coil his loins to collect and round his back in the air (not so awesome if you want to jump big jumps). The sensation is that of being pulled over the jump in a flat motion, rather than being pushed from power behind in an arced motion.

Solar’s style of jumping flat works for now. In fact, many riders would consider this style desirable, because it’s relatively smooth to ride. And, if he only has to jump small jumps, honestly he could stay “as is” and get by just fine. But this style won’t work well when he’s challenged with bigger courses or ridden at greater speed. I’ve got to teach him how to use his body a little differently, and give him time to develop strength. I’ve started this process with Solar by…

Using the Power of the Trot!

You’ll notice that I only trot Solar into jumps. If he carries a canter between two jumps on a related distance then I let him do so so he can start experimenting with balance, but otherwise I make him trot up to the base of every jump. There are two main reasons why trotting is pivotal to Solar’s jump training right now:

The last thing you want to do with an inexperienced horse is overface them–that is, force them to confront jumps or obstacles or speeds that they are not mentally or physically prepared to navigate safely. A horse will literally jump through fire for you if they understand what you want from them. You must foster this willingness by making sure they can succeed, one step at a time.

0:18: You’ll see on landing that I fall forward a little in my position. This is due to my lackadaisical and out-of-pratice lower leg position as well as the way Solar jumps at this stage in his training, with more “pull” than “push.” I need to sink deeper into my stirrups with even contact against the horse’s sides. Solar needs to learn to balance more before the jump to create spring from behind, which will produce a more organized jump.

0:30: Look at Solar’s willingness over the up/down banks–no hesitation whatsoever! Remember when I unloaded him a month ago how unsure he was about even stepping down from the trailer? He’s come leaps and bounds (pun intended) since then.

0:51: You’ll notice that I spank Solar with the crop here a stride before jumping the ditch. He wanted to drop his head and slow down before jumping. That tap with the whip was me telling him, “You got this! Go for it!” He had jumped the ditch a few times at this point in the ride. The first time I let him walk up to the ditch following another horse, stop and look, and then go, giving him ample time to try to figure it out. But at this point in the ride it was time for him to trust me and strike off with confidence.

1:02: I let Solar carry the canter between the two jumps. You’ll see that because he doesn’t sit back, engage, and balance in the canter, we end up awfully close to the base of the jump. He was able to pick his legs up this time to clear the fence, but a few other times when he did this he hit the rail with his hind legs. As the horse takes off over the jump I want to feel a moment of coiled collection, similar to what you get in a dressage lavade where the horse holds themselves up. As Solar builds strength and the ability to balance, his jump from the canter should improve. In the meantime I’m using the trot to teach him how to use his body in the best way for jumping.

1:23: Solar cantered into this little log pile with nice balance. I let him canter because it was an uphill slope to the jump, which encouraged him to carry more weight over his hindquarters and be balanced to the jump.

1:35: This is Solar’s first attempt through this grid (a grid is a combination of poles and jumps in quick succession). You can see that he is surprised and a little confused about so many things happening in a row. He loses impulsion. I know that this looks less than remarkeable, but this is learning in action! He’s figuring out how to get his feet sorted out, and I would never punish him for an effort like this at this point in his training. In fact I gave him a pat on the neck at the end because a month ago he would have seriously struggled to get down this line at all.

1:45: This is Solar’s second attempt through the grid. Look at how much more organized he is this time through. He nailed the striding and stayed straight. My own balance was compromised over the first jump, so I slipped my reins so that I wouldn’t interfere at all with his ability to use his body correctly. Because he had learned on the first trip what to do, and he was confident, he carried us cleanly down the line of jumps with improved form.

2:00: I ended the jump session by taking Solar over the largest jump he has ever jumped, a green steeplechase fence about 2’8″ tall. And yes, we trotted. The banked design of this fence is inviting and fairly safe. He was surprised by the effort required so he overjumped, but the challenge encouraged him to actually arch his back and produce a nice bascule shape over the top of the fence, compared to the flat style he normally jumps with. I liked ending the ride right after this effort to communicate to him, “that was great; you nailed it!”

A week from now on Sunday, August 4, 2013, Solar will be attending Lincoln Creek Pony Club’s Benefit Horse Trials in the hopeful division (jumps up to 2′ tall). This show will be a great challenge and learning opportunity for Solar. He’ll have to navigate small jumps that are brightly decorated and ride out away from the comforts of other horses on the cross-country course. For a horse with only a few sessions of jump training, it’s going to be a stretch! But I chose a level in which we can take it slow and focus on what we’ve learned so far. This is an extremely “user-friendly” show as they allow you to continue around cross-country and school the course no matter what difficulty you may get into. Ie: if you need to circle and try to jump a fence a few times you can do that without getting eliminated (of course, your score will add up negatively if you do that, but a schooling show is not about the score, it’s about having a positive, safe, educational experience for both horse and rider). Thank you LCPC for the discounted entry fee for Solar and for your efforts in offering this show each year–Solar is going to learn a lot! 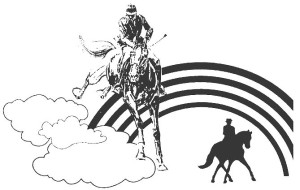 ** Thank you Rainbow Meadow Farm for the discounted schooling fee for Solar! Rainbow Meadow Farm’s course is perfect for an inexperienced horse like Solar. They have many lower level jump choices, including decorated show jumps and a fun variety of cross-country obstacles. Rainbow Meadow Farm also has two outdoor dressage arenas, a sand gallop track, and a menagerie of animals! We are lucky to have a venue like this in our area; it’s an affordable training ground for the green horse and/or rider. ** 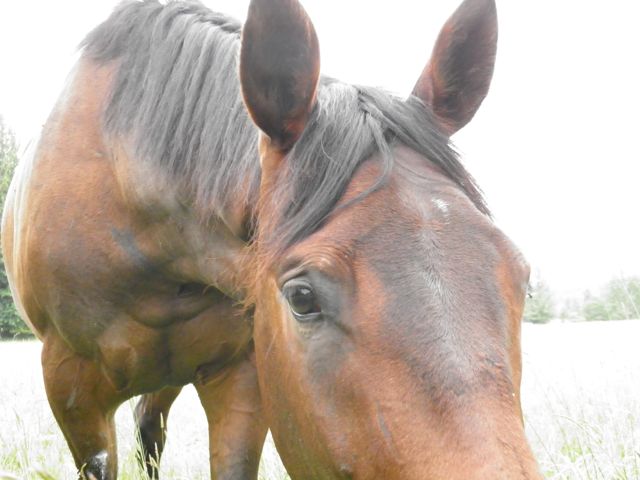 Day 8: First Show on the Horizon