DAYS 15-17. While many in the local community enjoyed watching live Wiener dog racing at Emerald Downs (home of the Prodigious Fund), Solar embarked on a weekend getaway to Whidbey Island.

Solar is an experienced traveler. Born in Kentucky and having raced in CA and WA, he has seen more of the world than your average horse. Solar showed just how cool and collected he can be when traveling. Not only did he promptly load and unload into an unfamiliar horse trailer, he traveled quietly and immediately settled in to his guest accommodations. He was the perfect house guest: he didn’t destroy anything, didn’t make too much noise, and wasn’t picky about the food or drink.

Here’s a quick video highlighting some of the activities Solar did over the weekend at the Knott’s beautiful farm, including all the new animals he met. You’ll see at the end of the video that Solar might have cow sense (well, goat sense)–I had to pull him off that goat! Thoroughbreds are more versatile than some give them credit for.

The time Solar’s spent doing trail riding, groundwork, and body control exercises is paying off. Solar is much more comfortable riding across unfamiliar terrain–also a sign that we’re establishing a solid relationship together based on trust. I can tell he is more relaxed because he sweats less, moves forward better when I tell him to, and is alert but not spooky. Solar’s also more aware of what his feet are doing underneath him. Developing a sense of balance–for both horse and rider–is key for success in any horseback riding discipline.

If left to his own devices, Solar stands and moves around with the majority of his weight over his frontend–also known as being “on the forehand.” This is typical of most horses, and is not surprising especially in a younger horse or an ex-racehorse who may not have been taught to adjust their balance onto their hindend. The goal of most training is to teach a horse to gradually carry more weight over their hindquarters so that they can perform more advanced maneuvers safely and carry a rider economically. Many of the exercises Solar and I are doing are designed to gradually help him adjust his balance.

When I first started cantering Solar under saddle it was obvious that his right lead canter depart was extremely rusty and his preferred canter lead is his left lead. For example, on day 5 of the Challenge we did a 15 meter canter circle to the right on the LEFT lead.

Just like people, horses can be right handed or left handed. This preference can be especially pronounced in young horses who haven’t progressively developed balance through training. Furthermore, some ex-racehorses may prefer the left lead as they race to the left, though they do use both leads during races.

In the picture below you can see I’m smiling. That’s because for this moment in Solar’s stride I feel the potential in his canter. He’s momentarily balanced on his hindend. The engagement from behind has lifted his topline. You can see an arch in his neck that is NOT created by me pulling on the reins–the mechanics of his body produce this “roundness.” 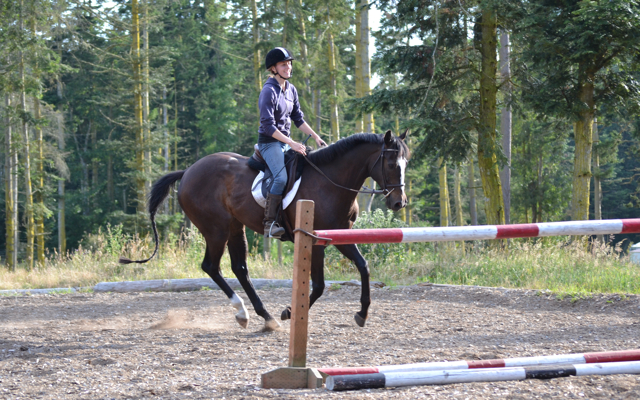 This is by no means a perfect canter–he’s leaning to the inside still and I’m not communicating much with rein contact–but this is a step in the right direction. Soon I’ll start to use outside supporting rein and inside supporting leg to help Solar straighten his body and shift his weight onto his hindend more. For now I’m focused on the basics: encouraging him to move forward, maintain rhythm, and stay on the correct lead.

Perfecting a more balanced, collected trot and canter is key if Solar is going to be a winning sporthorse–though it may take many, many hours of practice for him to build up the strength and muscle memory to do so. He is not as naturally light on the forehand as other horses in this 100-Day Challenge, but he is by no means incapable of producing high quality, correct gaits (watch him cavort in the field and you’ll see the athleticism there!). What I see from Solar now is the promise of good things to come! We just have to put in the time and training to get there.

Training Happens One Step at a Time

I might not have the engineering feats of Mark Bolender’s extreme trail course at my disposal, but often nature provides ample opportunity to experiment. A solid stump that is level, not rotten, and free from ragged edges can serve just fine as a horse platform.

Some might think that this is just trick training… a waste of time… not “real” training. But these types of fun, simple exercises absolutely inform a more “traditional” training program.

Most notably, they help establish effective communication patterns between horse and human. When we train our horses to try “outside of the box” tricks or exercises, we are really learning how to communicate with one another better. Especially when working with off-the-track horses who may have been trained from a very early age toward unthinking obedience, these types of exercises teach horses how to think and learn. The horse must engage with the handler to seek the right answer. This is similar to what Meika Decher was doing with The Last Say in the first week when she used clicker training.

Standing on a Platform Teaches Communication, but What Else?

Experimenting with getting your horse to stand on a safe, solid platform can help toward other training goals, such as:

Other Successes from the Whidbey Island Trip

Solar was awesome in an indoor arena. We don’t have access to an indoor at Nayborly Farms, so the Knott’s arena was the first time I’ve worked Solar in a covered enclosure. I don’t think I’ve ever ridden a green horse who was so well mannered in a new indoor arena. This arena is used for therapeutic riding lessons, so the edges were rimmed with a wide assortment of objects–a basketball hoop, gaming poles, a large ramp, a tractor. Solar walked into that arena like he’s been riding there every day of his life. He didn’t look at a single thing. He went deep into his corners and leg yielded right out to the walls. I know I keep saying it, but this horse has such a wonderful temperament.

Solar was calm and composed about meeting (strange) new animals. I’m not exaggerating when I say that sometimes exposing your horse to new animals can be the difference between winning and losing at a competition or staying safe. I’ve seen dogs run loose next to horses running cross-country, and the horse had to maintain composure to stay focused on the task at hand. I’ve won dressage tests because there were cows near the show ring, and other people’s horses were unable to focus. I’ve been on a trail ride where I had a near death experience with my pony because a pig was running on the side of the road. I’ve also been to expos and fairs where horses have to cross paths safely with all manner of species… Solar learned this weekend that new animals are not a cause for concern; this makes him a safer and more reliable horse to be around.

* Thank you to the Knott family for letting Solar stay at their wonderful farm for the weekend. Thank you Kelsy Smith for taking pictures and videos. *

Do you have questions about Solar’s training progress? Please feel free to leave a comment below or contact me. 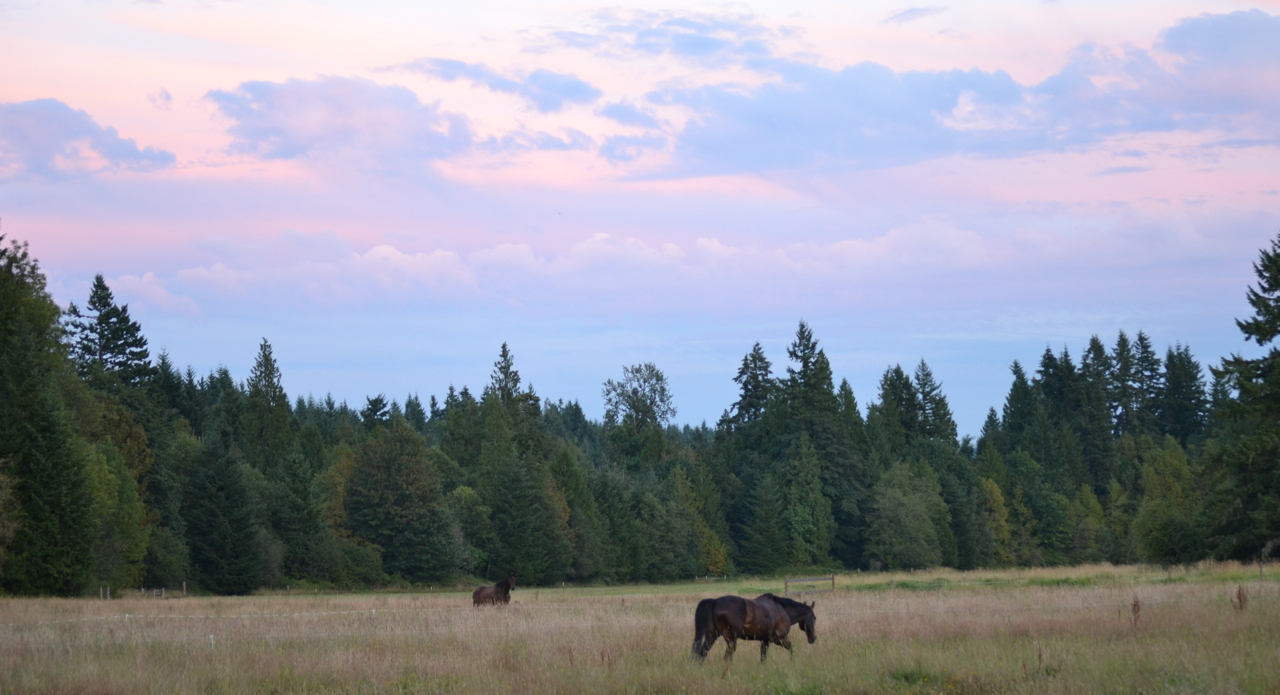