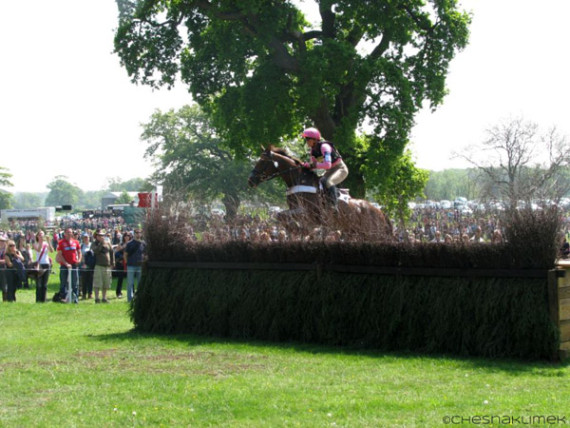 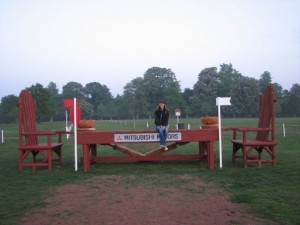 In 2007 I lived with the Bell family in Thirsk, England and served as a working student for Helen Bell Equestrian. I’ll risk sounding nostalgic to the point of sappy: it was a once in a lifetime experience–a horse-filled, three-day eventing dreamland.

One of the many highlights of my trip was attending Badminton Horse Trials. Not only did I get to watch all three days of competition, I got to camp in the heart of Badminton’s show village with an all-access pass to VIP goings-on. Amazing! As you’d expect, I saw some of the world’s best horse and event riders that weekend. Two of my favorite horses from the 2007 competition are in equestrian headlines this week, stirring up old memories.

First, Nicola Wilson decided to retire her four-star, Olympic event horse Opposition Buzz. After the Americans, this was the pair I chose to cheer for in 2007, as Nicola was based just minutes away from the Bell family in Yorkshire. She and “Dodi” were my home-away-from-home celebrity pair, and I’ve enjoyed following their career ever since. This horse is full of spirit and energy, and together, the two put on a great show.

On a sad note, also in the news this week, the superstar British eventing mare Headley Britannia was euthanized after an injury on April 1. She was the winner the year I attended Badminton, and a true joy to watch. Regardless of her pintsize stature, she made the gigantic jump courses look like peanuts. She inspired me to make the most out of my little horses at home, Pippin and Sewickley. My condolences to the Fredericks family.

Being in the presence of amazing horses and riders like the ones above is a privilege, and the experience of Badminton 2007 is one I’ll remember forever. Here’s a snippet of an email (circa May 2007) sent to friends and family after Badminton; now shared with you:

“Cross-country day Saturday dawned, as did the thousands of people who came to watch. I helped in the vendor tent a bit in the morning. And I was very pleased when I finally escaped to watch none other than the Shetland Grand National! This has to be one of the greatest sports to watch. A little track of miniature steeplechase jumps was set around the arena. Then out paraded 20 Shetland ponies and 20 little kids in bright racing silks. They had three heats of racing, and every second of action was a spectacle. First, getting the kids on the ponies was difficult, as the ponies pranced around in excitement. Then getting the ponies into line was a challenge, as they kept rearing/bucking/bolting/breaking early. Then the race itself was so funny… these ponies just flew around on their little legs and popped over the jumps. A kid fell off in each race (unharmed), and one pony turned around and ran around the wrong the way out of control. In the first heat the kids missed their final turn, so the pony who was at the back of the pack ended up winning the race. It was utter chaos, and so cute!

So after the Shetland Grand National (which was worth the trip alone), the much anticipated cross-country competition kicked off. Before the first horse had even set off, cross-country brought a lot of controversy. Our very dry weather conditions over the past month made the ground firm, and despite the work of the ground crew, 22 riders decided to withdraw so as not to endanger their horses, including many of the top British riders. But regardless, it was still a once in a lifetime day. It was very warm out, and I ran around from jump to jump to catch a bit of everything. It was just amazing watching the horses in action, they are such athletes. Watching the British crowd was also very entertaining. They come with folding tables and little sandwiches, they have hats and dogs and sausage rolls… Badminton is as much a social event as it is a horse show.”

You can see pictures I took during Badminton Horse Trials 2007, posted here.

Oh My, My Horse Can Jump!

10 Affirmations to Tell Yourself in the Cross-Country Startbox