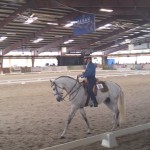 When we pulled in to Haras Cup in Magnolia, TX (and promptly got our truck stuck), I saw the magnificent Lusitanos and Andalusians with their picture-perfect Portugese riders executing flawless working equitation maneuvers (see right)… I felt a little bit like the unqualified pony girl sneaking in the back door at the party.

After all, this is my trusty steed… 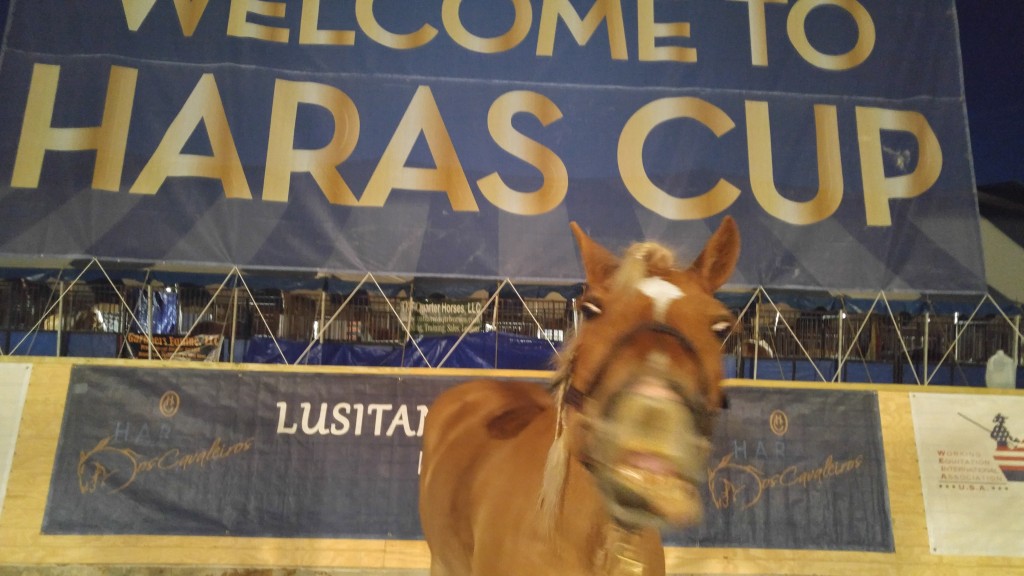 My goals for the trip were: 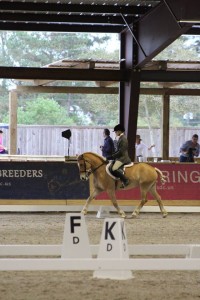 Friday was miserably hot and humid. Pip was sweating all day just standing in the stall (even with his body clip) and I was seriously regretting my decision to ride in a stock tie and wool hunt coat!

To save pony, I tried to keep our warm-up short. The main arena was challenging in that there were many distractions taking place on the outskirts and there wasn’t enough room to trot around the outside of the dressage courts.

Our test went fine, but we didn’t do our best. We had a bobble coming back from the medium canter (he did a flying change instead of a downward transition and I corrected by trotting) and Pip was very behind the leg (lazy). However, our score put us in third out of 17 riders with 15 points overall. I was disappointed that we hadn’t delivered our best performance, but also relieved that we were competitive anyways and proud of Pip for traveling over 2,700 miles (the farthest of any horse in his class) and remaining sound and cooperative under the circumstances. It’s understandable that he wouldn’t necessarily be performing at his peak. 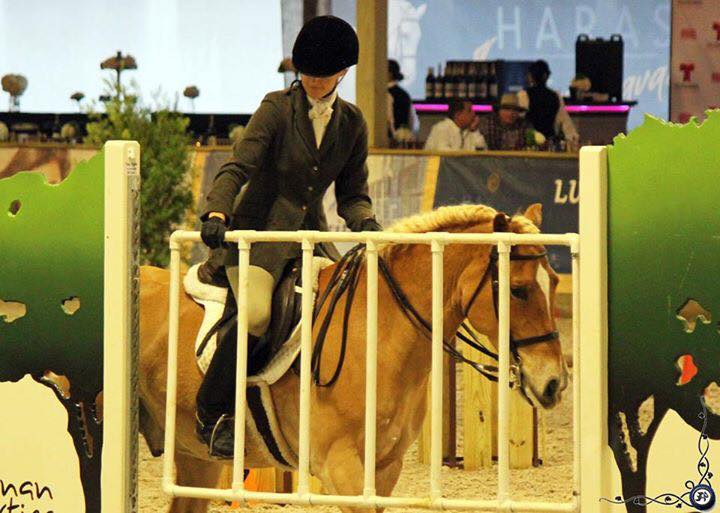 During warm-up we ended up having time to spare before our round. I decided to wait by sitting on the mounting block. Pip was unusually cuddly; content to rest his big loose lips on my shoulder and take a power nap. As we sat there with all the other talented competitors preparing for their rides and the rain thundering down on the tin roof, I did ask Pip if he would please put his best hoof forward. He has accomplished so much in his life and deserves to compete on a national stage–I wanted him to know that this was his moment to shine.

Thankfully, he did! After our round I thought we had delivered a solid performance. It didn’t feel perfect, but also, nothing stood out as deficient. Mainly, it was a straightforward and fun ride! It was especially fun knowing that we had so many friends and family watching the live streaming video at home. You all are awesome!

Late that evening scores were posted and we learned that Pip had won the phase with the only score over 70%! This earned us 18 points for the phase, moving us up to second place overall. 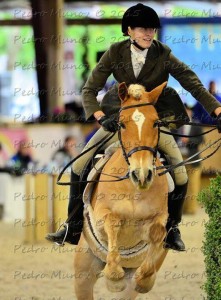 I knew going into our speed round that we had a good chance of finishing competitively, maybe even to win. Pip might be short, but he’s speedy (thanks to many years of racing friends, mastering jump-offs, and hightailing it cross-country). To win overall, we either had to win the speed phase outright or beat the current overall leader by at least two placings.

With a few gallop stretches across the arena, the course wasn’t exactly set up for a short pony to beat taller, faster horses. However, I knew we could make tight turns over the jump, open the gate without backing up, and shave off seconds elsewhere on the course by being nimble and “kicking on.”

Our round started off strong. I kicked Pip around like a pony club kid playing gymkhana. He flew over the jump, galloped over the bridge, dido-ed around the pen without so much as a half halt, and opened the gate without an extra second lost. But then…

At obstacle #8 I missed the ring. This isn’t that big of a deal–I was way up on the time and there’s no penalty for missing the ring, though if you catch the ring you a get -10 second bonus off your final time. However, when I missed the ring, my inexperience with the sport reared its head–I threw down the lance thinking I would no longer need it and could quickly move on the next obstacle. Imagine my dismay when I looked up and realized that the next obstacle required me to deposit the lance- NOW LYING ON THE ARENA FLOOR–into the barrel from horseback! Whoops.

The only way to avoid disqualification was to get off, get back, and continue the course. We went as fast as possible around the rest of the course, but all I could think when we crossed the finish line was that I had blown Pip’s chances of winning. He hadn’t put a foot wrong–it was a pilot error!

Amazingly though, even with my little “I’ll-just-get-off-and-have-a-party-here-on-the-ground-mid-speed-phase-to-keep-things-interesting” moment, Pip was over 11 seconds faster than the current leader’s actual time and one second faster than the leader’s final time minus the bonus he got for catching the ring. We beat the leader–I couldn’t believe it! On top of that, we placed sixth in the phase and one other pair finished within the one second time difference between Pip and the leader. This means we earned 12 points and the leader earned only 10. Our final score was 45; we won our division by one point! 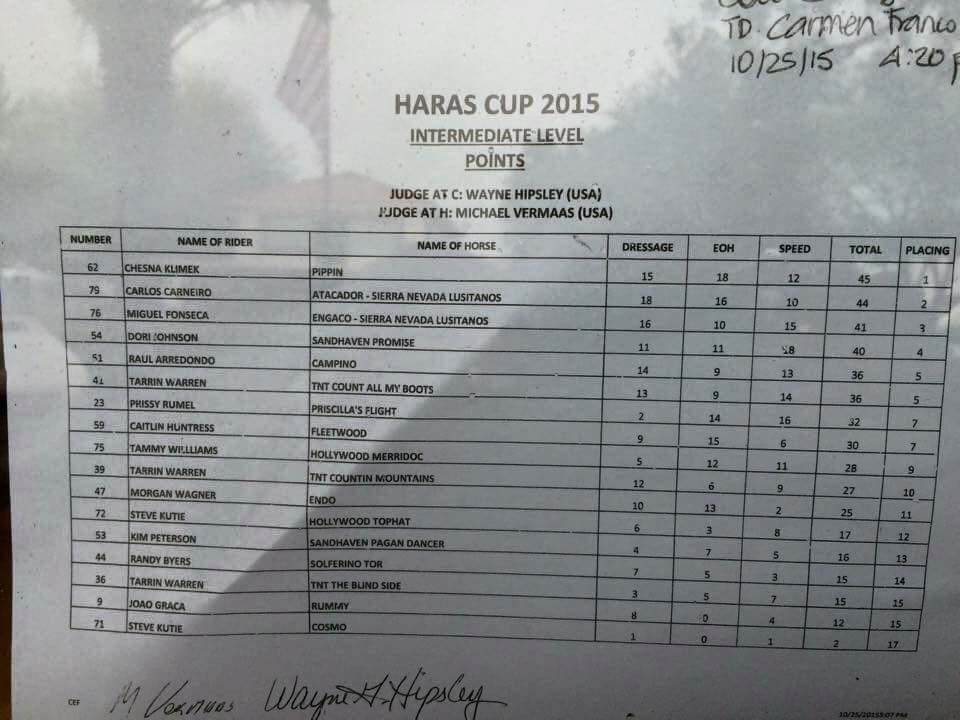 Pip is a champion! He let me accept the winnings on his behalf… 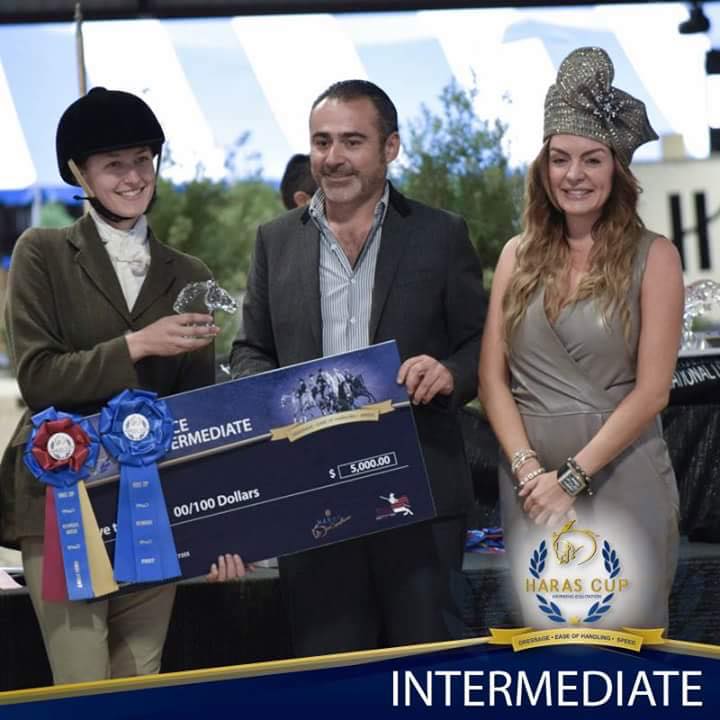 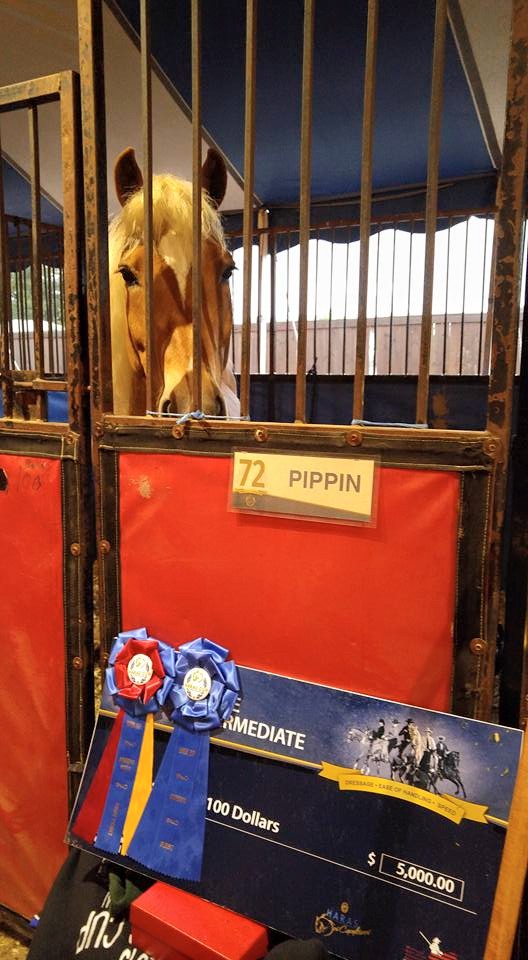 After taxes, the prize money will go toward recouping our show fees and the cost of gas and lodging. What is left will help fund our 2016 show season. Pip is relieved that most will go toward shows for my youngster, Joey, who will be starting his career in three-day eventing.

I am very grateful to everyone who helped make this trip possible for Pip and I, especially Julie Alonzo of Caballos del Corazon for driving us in her rig. We met so many new friends like Endo and Morgan and Caitlin and Milagro, and we learned about working equitation from some of the best judges and riders in the sport. Thank you also to the show staff and all the awesome competitors who braved the weather and put on a super show.

Thank you for following along with our trip! Stay tuned to my blog for more articles and updates on whatever adventures come next. 🙂 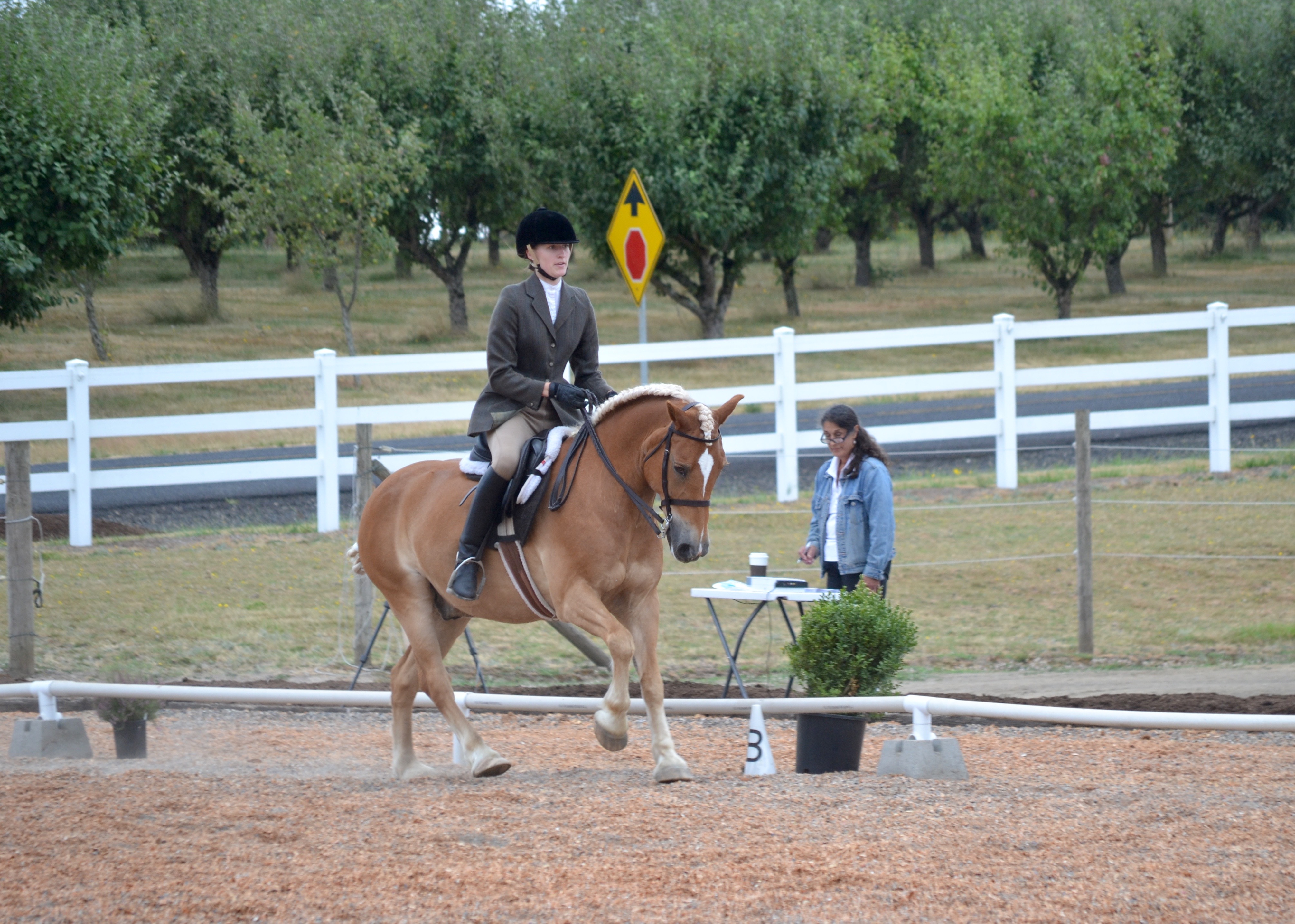 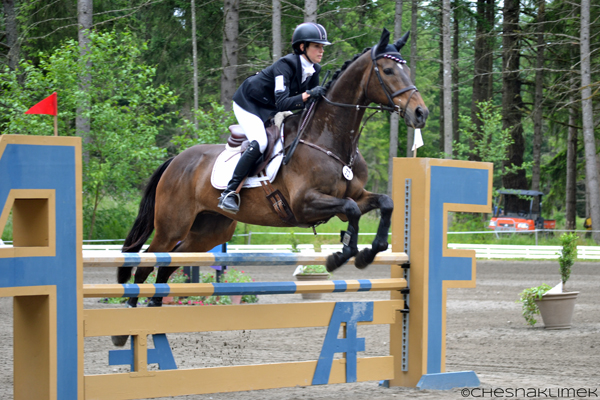 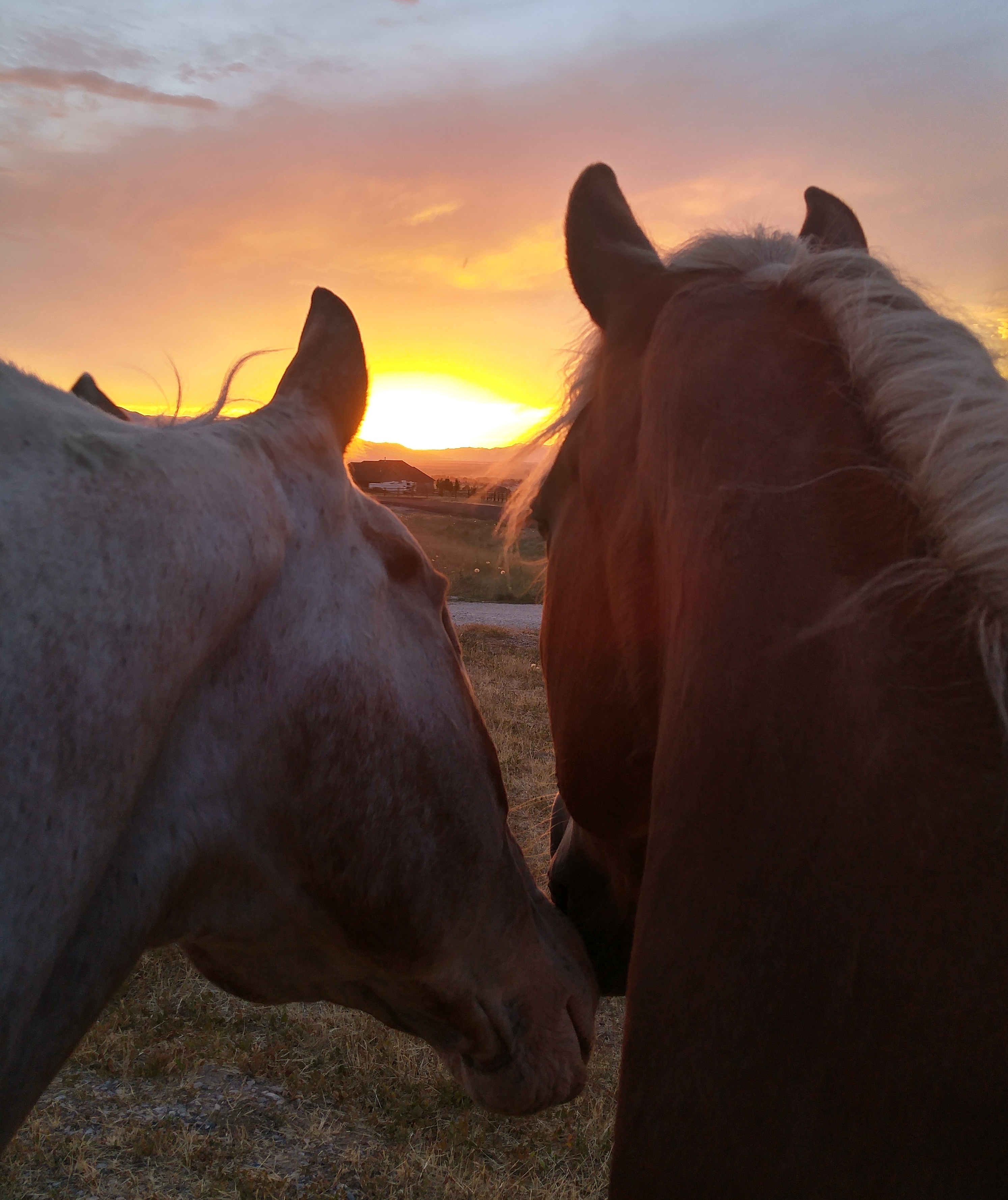