DAY 50. Move over Brad Pitt, here’s an updated conformation picture of Solar halfway through the 100-Day Trainer Challenge. Solar’s been in excellent health and soundness from day one, so he doesn’t look tremendously different. But there are some changes. Since he’s been in the field, his color has bleached from the sun (he’s going for the trendy ombre look). He has trimmed down to a working weight and developed some new muscling, predominantly in his hindend. Before there was a little jiggle and wiggle back there (remember, his last race was over three years ago); now it’s firm and toned. His hooves are neatly trimmed, his mane pulled and tamed to one side. 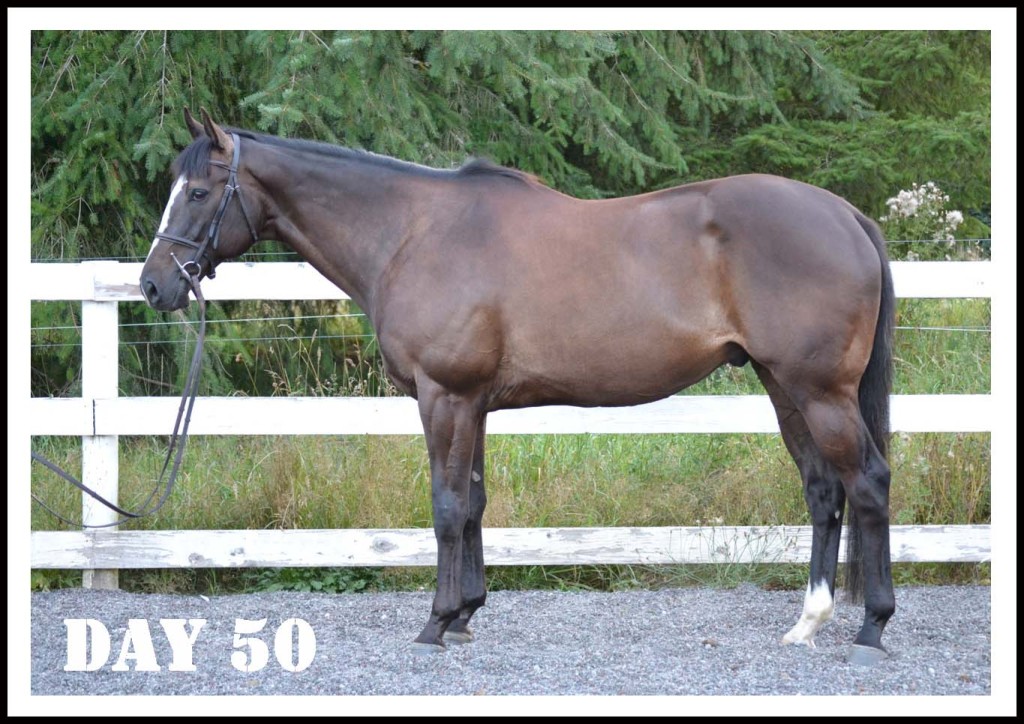 Many of Solar’s physical changes you can’t see in a picture, but you would feel and sense in person. We’ve been working with him on staying mentally alert and tuned in, and this translates to a horse who is softer, suppler, and better balanced. Solar has more life in his body and freedom in his feet. You’ll see that he stands politely on the end of his lead and moves forward freely and promptly when guided. Though his default is still to hang out on his forehand, he adjusts when I ask him to. There is a lot less “push and pull” in his body, thanks to the work we’ve done on the ground and under saddle to teach Solar to “follow a feel.”

Also, Solar has been eating daily supplements from Uckele Health & Nutrition mixed into soaked alfalfa pellets (for protein) and senior feed (for palatability/calories). These supplements ensure he’s getting the best care from the inside out. I’ve noticed increased shine to his haircoat, and I’m happy with his ability to cope with a full workload–this summer has been a definite change in pace from what he had been doing before. I’d bet that the Uckele supplements also contribute to his improved willingness to go forward and carry relaxation through his frame. When you have the nutritional and supplemental support you need, you feel and perform better. Thank you Uckele!

It’s hard to imagine Solar getting any better looking than he already is, but if the next person continues to work Solar correctly from back to front, he’ll look notably different a year from now. His under-neck will lift more, and he’ll fill out with more muscling along his topline: his upper neck, back, and croup. He’s already well-built for a Thoroughbred (good bone, clean legs, nice wide frame, keeps his weight), but extra muscling will make him truly look the part of a sporthorse. I think with continued supplements he will also grow out a thicker tail.