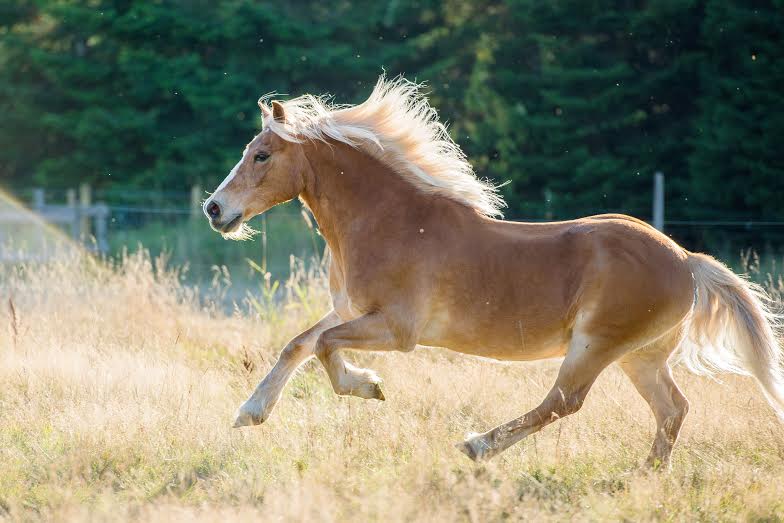 Above: Arron, age 32. His last summer at Nayborly Farms.

Yesterday, our accomplished friend Arron was put down after a short bout with colic. Arron would have celebrated his 33rd Birthday this April. So, in honor of all this little horse was, I want to share with you about Arron and all the big things he did in his life.

Arron was born in 1983 at Fohlenhof M&B, one of the premier Haflinger breeding farms in North America. His mother was the refined and spirited mare, Siwa, and his sire was the beautiful and kind stallion, Alex M&B. 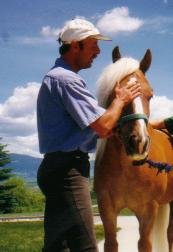 Early in his life, Arron was hand-selected by Fohlenhof’s own farm manager, Stefan Bundschuch, to be his personal riding horse. In those early years together, Stefan and Arron developed an incredible partnership. Stefan trained Arron in upper level dressage movements such as half-pass, two-tempi lead changes, and passage. They gained notoriety for their amazing performances at Fohlenhof, including jumping over 4 feet and also jumping over another gelding trained to lie flat on the ground.

When Arron was 10 years old he coliced severely and was rushed to emergency surgery. Arron survived, and after many weeks of recovery he returned to his life and work at Fohlenhof without hesitation.

Here is what Stefan shared about Arron:

I have been around Haflingers all my life and Arron is the second oldest Haflinger I have ever known – the oldest one I know is now Astro M&B at Villa Rosa with Heidi Gaian in California.

I first met Arron when he was three years old at M&B Farms in Canada. He was in a paddock with a bunch of other geldings running around and doing 3 year old goofy stuff. But it was the way he carried himself while playing that caught my attention. His free-floating, elevated trot and his uninhibited canter were so different from his stable mates.

Working with him was a blast – never a dull moment. He had me figured out way before I figured him out. Teaching him new things always meant him teaching me new things. There were times when he drove me nuts and made me feel like quitting riding altogether. But then there were times when we came together and it was magical. It was like he could read my mind and responded to my thoughts. We were as one. For years he was my horse to ride almost daily.

As he got older, I would integrate Arron into our riding school program. Only the most sensitive and experienced riders were allowed to ride him. Again it was his nature to frustrate even the most senior riders. We had students crying their eyes out, not being able to get Arron to trot. He would not give an inch until they asked him the right way. Then he would elevate them to a level that only a few of us have ever experienced.

Arron was my friend, my anger management, my frustration, my feeling of ecstasy, and the best teacher I have ever had the privilege of knowing. 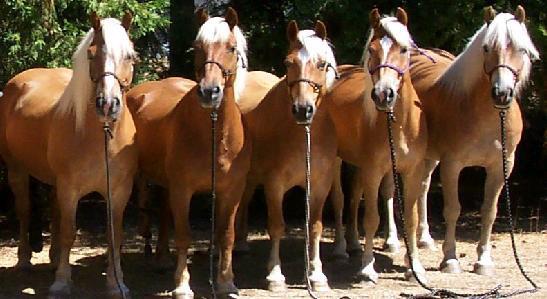 Above: Arron (far left) and the other Nayborly Farms Haflingers.

In 2002, as Fohlenhof M&B disbanded, Arron joined us at Nayborly Farms thanks to Stefan and his wife Andrea. He was 19 years old–four years the senior of Kelsy and I. For several years preceding this transition, Arron had been enjoying life in the beautiful pastures of Vernon, BC, and had retired from work. He was healthy and sound, but was overweight and out-of-work. Under the care of Kelsy’s mom, Cheryl, we began to bring him back.

Even with his lack of fitness, Arron’s zeal and athleticism quickly became apparent to us. In the beginning, when Kelsy or I tried to ride him, he would spend a majority of the ride offering to passage–an elevated and suspended trot achieved by the most advanced dressage horses. We were both amazed and frustrated by this. It was incredible to ride a horse with such a high degree of collection and training, but we also had no idea how to get him to do the basics. He was fiery and powerful. To us Arron seemed like an intense Austrian uncle who didn’t understand English very well, let alone the vernacular of “teenage girl.” Despite these challenges, Arron tolerated us. And in doing so, he taught us so much. 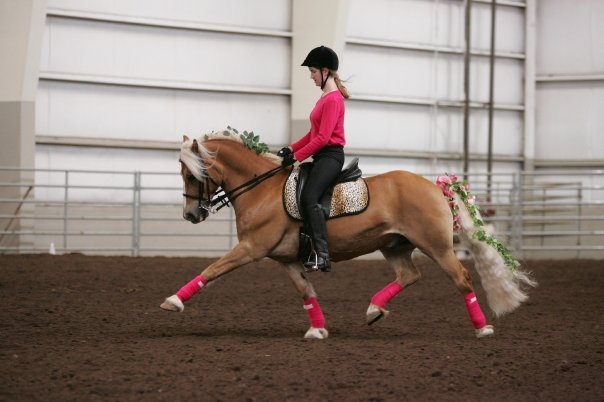 Above: Kelsy Smith and Arron performing a dressage kur to songs from The Jungle Book.

Arron was very much his own man, but after those early months together Kelsy and Arron started to find common ground. Arron’s fitness came back with regular work, and Kelsy learned the cues required to ride Arron harmoniously. Thanks to Arron, both she and I learned how to perform advanced movements like flying lead changes and extended trot. To have such a sophisticated, well-trained athlete on our farm made us feel like the luckiest horse-crazy girls out there. It also irked our other ponies, because Arron raised the bar of our expectations for them.

When Arron was 20 years old, Kelsy’s primary competition pony, Precious, came up lame shortly before a Novice-level three-day event. Not wanting to miss out on the show, Kelsy entered Arron instead. 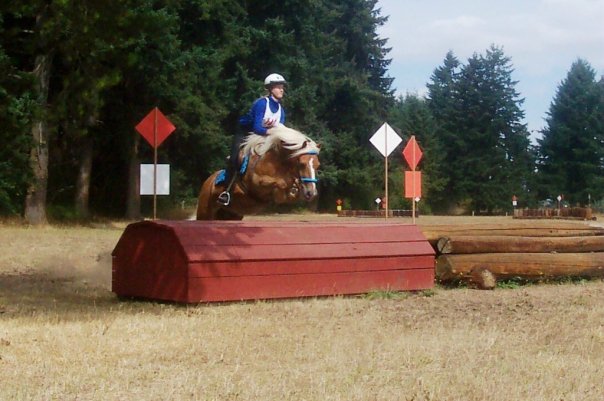 Above: Kelsy and Arron competing in three-day eventing.

Arron won the competition handily, as if he had been competing for his entire life. In reality, it was his first horse show ever. I’ve never seen Kelsy as excited and happy about her cross-country round as she was that day. She and Arron went on to compete in, and win, many other shows together.

In addition to his new-found show career, Arron started to participate in breed versatility demonstrations throughout the Pacific Northwest. He performed upper level dressage, jumped jumps, and even showed off new tricks that Kelsy taught him such as bowing and striking. He has graced the cover of Gaitpost magazine and been featured in local newspaper pieces. Arron’s show and performance career lasted into his 30th year. 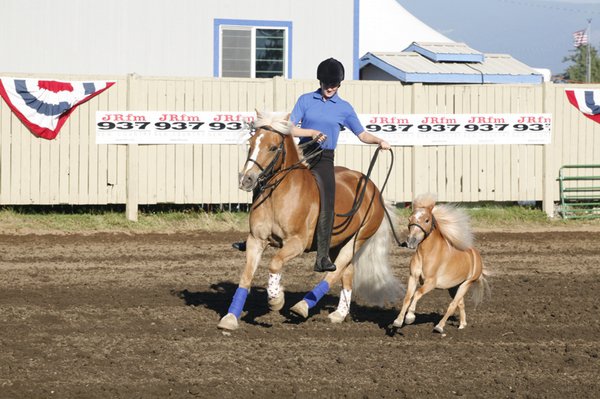 Above: Arron and his little buddy Snickers performing at the Northwest WA Fair in Lynden.

Here is video from a breed performance Arron, along with his nephew Pippin, did at the Northwest Horse Fair & Expo (Arron is aged 30 and wearing the black polos):

As accomplished as Arron was in dressage and over fences, he was also brave and honest in everyday work at Nayborly Farms. He helped Kelsy and I train horses, be it ponying them under saddle or giving leads on scary parts of the trail. His patient demeanor helped many young horses find their confidence. 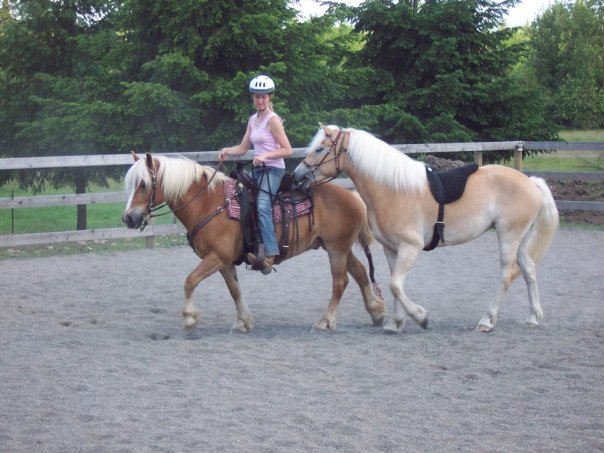 Above: Arron ponying a young horse in training.

When Kelsy left to finish college in 2007, our friend Patti Mize took over the ride on Arron at Nayborly Farms. 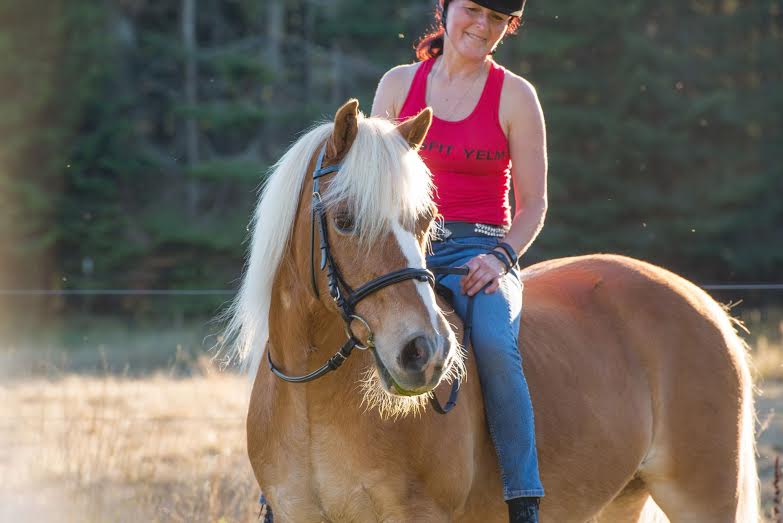 Patti often called Arron her “perfect pony.” In her eyes, I think, he could do no wrong. Together they enjoyed jumping, trail riding, and “running like the wind”–even though Arron wasn’t known for his speed. Patti credits Arron with helping her find her confidence in three-day eventing. They competed successfully at the Beginner Novice and Novice level for many summers, winning ribbons at every show out, sometimes beating competitors a couple of decades their juniors.

Here’s video of Patti and Arron competing at (and winning!) an eventing derby on Arron’s 27 Birthday:

Patti and Arron were featured together in Paisley Pony Magazine. Patti’s grandkids took their first horseback rides on Arron. After his competition career ended at the age of 30, Patti rode Arron a few times each week, mostly out on the trails or practicing flatwork in the arena. Sometimes, they would pop over small jumps just for fun. On his last day with us, Arron and Patti shared a typical, peaceful ride together before he fell ill. 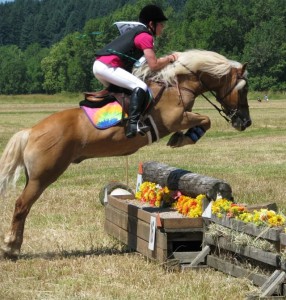 Above: Patti and Arron flying over a cross-country course.

Today Kelsy and I reminisced about this old horse, and we were amazed to realize that Arron had spent 13 years with us at Nayborly Farms–nearly half of his life. We had no idea what to expect when Arron joined our herd as a chubby 19 year old. Would we–mere teenagers without formal dressage training–be able to handle him? Would we get a few years of riding out of him? Would he be able to compete? Arron surpassed all expectations by remaining healthy and riding fit until his very last day on earth at age 32. He came to us an “old man” and left us as an “old man,” and at no point in his life did he lose value in our hearts. 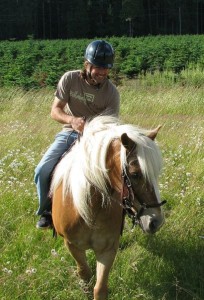 Arron touched many people over the years. From taking new riders safely on the trails around Nayborly Farms to wowing crowds throughout Washington and beyond. Many people have reached out to us on Facebook to share stories and memories of Arron at Fohlenhof. Our friends have enjoyed getting to know and ride this regal, reliable horse. Here’s what our friend and long-time Haflinger breeder, Emily Gibson, wrote of Arron:

I first met Arron at M&B Farms when he was ten years old and Stefan Bundschuh, the farm trainer and manager, used him in a conformation demonstration pointing out everything that you don’t want to see in an ideal Haflinger. Not only had Arron survived two colic surgeries, but he had legs that weren’t straight and a few other flaws that Stefan pointed out that I can’t even remember now over twenty years later.
I definitely remember after that demonstration, Stefan saddled up Arron and did a remarkable Grand Prix dressage demonstration complete with extended trot and passage, and then switched saddles to do an incredible jumping demonstration, all on a gelding with conformation challenges that had to be overcome with dedicated training and strong fitness. Arron could do it all.When he came to live at Nayborly Farm, he became the “go to” horse for Haflinger demonstrations in our region, as he and Kelsy traveled to various exhibitions and fairs to show what the breed could do.  He came to Lynden countless times to show off his talent along with Chesna’s Pippin, much to the delight of huge grandstand crowds. They were pictured on the front page of the local paper in a simultaneous jump, and fair-goers were always thrilled to meet the performers in person in their stalls after the show. He also was the Haflinger that our younger Haflinger kids got to “try out” to find his “buttons to push” for his passage, and I delighted in watching their faces light up as they felt that strength and collection in a horse’s body for the first time.My favorite memory of Arron has to be a few years ago when I had opportunity to visit Kelsy and Chesna and go for a ride on the trails and in the woods surrounding their farm. As I’m no longer a regular rider because of neck trouble, they put me on Arron who kept me safe and sound through an hour of up and down hills, through a river and across wide meadows. Arron will be very special to me because of his gift of a delightful ride through beautiful countryside that day. He knew I was someone who needed to be taken care of, and he did a wonderful job.I know there are hundreds of Arron memories from so many who met him over his long life. We were blessed to know him, and I know we all will miss that big willing heart in a small imperfect body. He was perfect to us.

I think anyone who met Arron, myself included, would agree with Andrea Bundschuh who wrote about him many years ago: “We feel fortunate to have the honor of knowing him.” 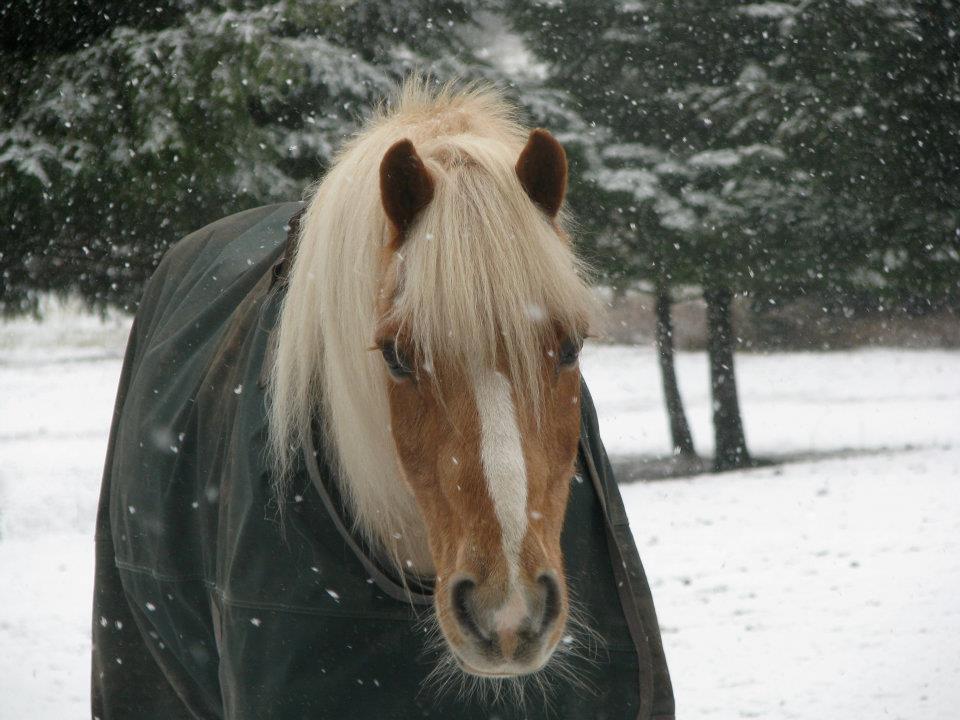 Arron, we all will miss you. 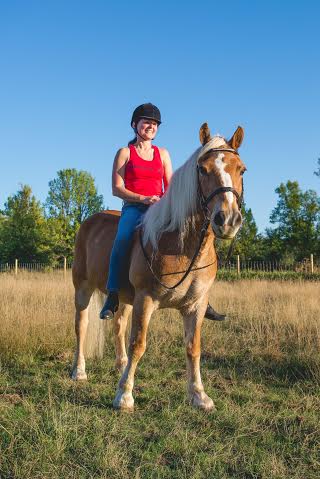 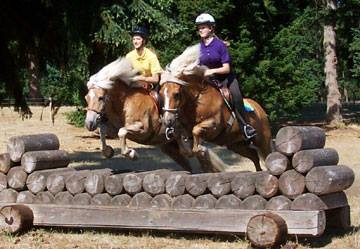 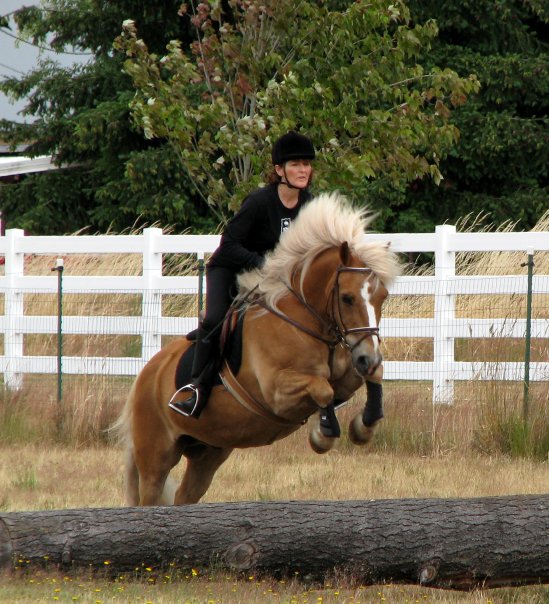 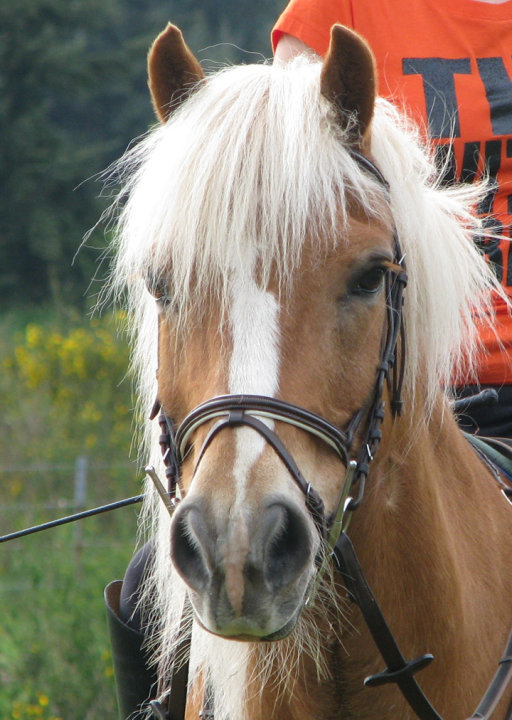 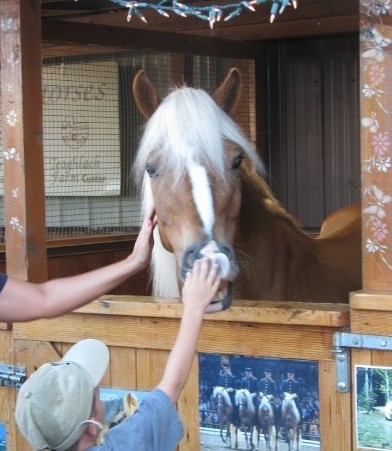 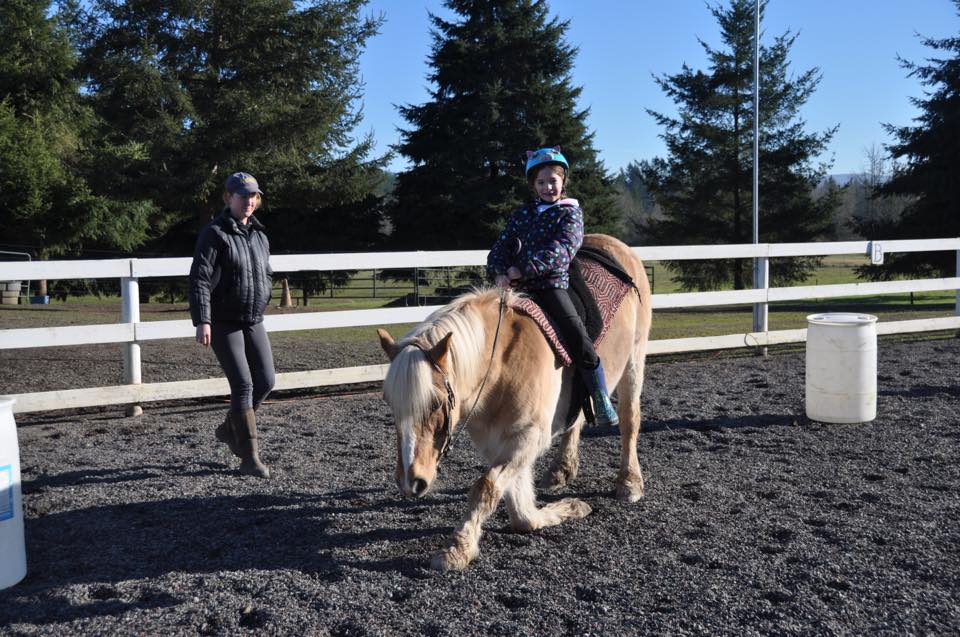 Photoshoot with Pippin, a Haflinger Heartthrob